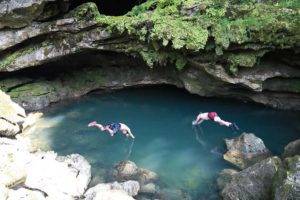 The Phong Nha National Park is made up of pristine virgin forest that spreads through a fascinating landscape. The karst formation has developed since the Paleozoic (about 400 million years ago) making it the oldest large karst area in Asia. The area is full of large cave systems, the most famous being the Paradise Cave, Hang En and Phong Nha Cave. Hang Son Doong, now recognized as the largest cave in the world, opened in 2014 as part of a 6-day hike for a small number of tourists. The park derives its name from the Phong Nha Cave, which contains many fascinating rock formations and the Kẻ Bàng Forest.

Further information can be found here.